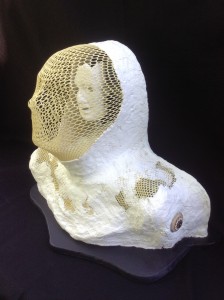 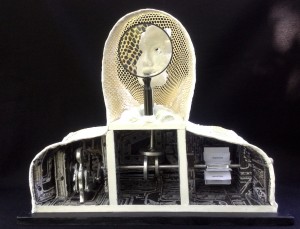 The majority of this type of work belongs to my Sculpted Haiku series and were specifically designed to support a text. The text may be incorporated, displayed as a print, or produced as a handout. I learn with my hands and find that the actual production really helps in my attempt to make the text live in space and for the meaning to have dimension. Working this way requires a distillation of both the construction and the text. 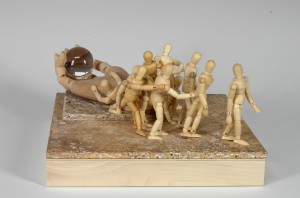 Early Refuge  &  March to Completion  were the very first pieces produced after a friends challenge to produce work from materials we could find lying around our studios. We were not allowed to go out and buy anything. This seemingly simple studio   challenge sent me off to explore how many projects I could envision and complete with materials that were recycled, upcycled or repurposed from within my own environment. The pieces in this series were also my very first sculpted haikus and both were included in the Nashville “WORDS ON WORKS” show.(text for March to Completion is magnified and read in the acrylic sphere.) I have included these examples, not because I feel it is my best work but because they were the first of this type of structure and gave me the opportunity to think of text and image in three dimensions while considering the materials impact and reuse. They are a real reminder for me that sometimes you just have to make something exist in space, send it out there and ‘let the chips fall where they may.’

American Santos was produced after reading a call for entry for the Loyola University Chicago show, “REFORMING US/ Immigration Through Art.” I was very glad to jury into this show and also into ‘THE FEAST’, juried by Liz Hickock, with  Heaven or Hell/parable of the long forks.  Both of these pieces reinforced the validity of the haiku process for me.

The RETUNE NASHVILLE piece, Corner of Cowan and the Cumberland, was a response to the devastating flood of May 2010 and how it affected the music community in Nashville. It was conceived and donated to be a part of a fund raising effort to replace the destroyed instruments of uninsured musicians.  This piece is mammoth and displays the confidence I had gained in reusing various materials that were slated for the trash. Upon close inspection you can see the musicians face was banded with the remaining sides of a guitar, one of my husband’s destroyed in the flood while in storage at Sound Check. 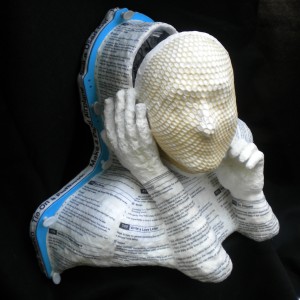 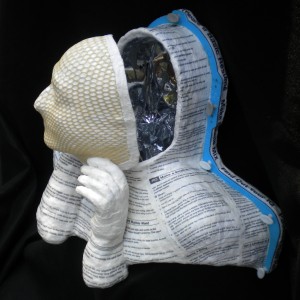 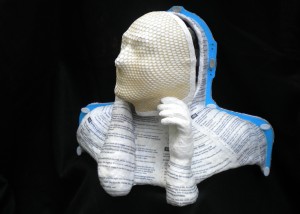 “Reflections in Courage ” for the COURAGE UNMASKED - 2014 Vanderbilt  fund raiser. Patient’s radiation mask was used as base. Face portion still retains uncovered mesh. Plaster strips, molded hands and face (interior), wood and metal supports, mylar adhesive paper on acrylic sheets in interior, transferred text from How to do Almost Anything covers torso, matt acrylic varnish. July 2014. Had a month to conceptualize and complete.

Thank you in advance for respecting my copyrights